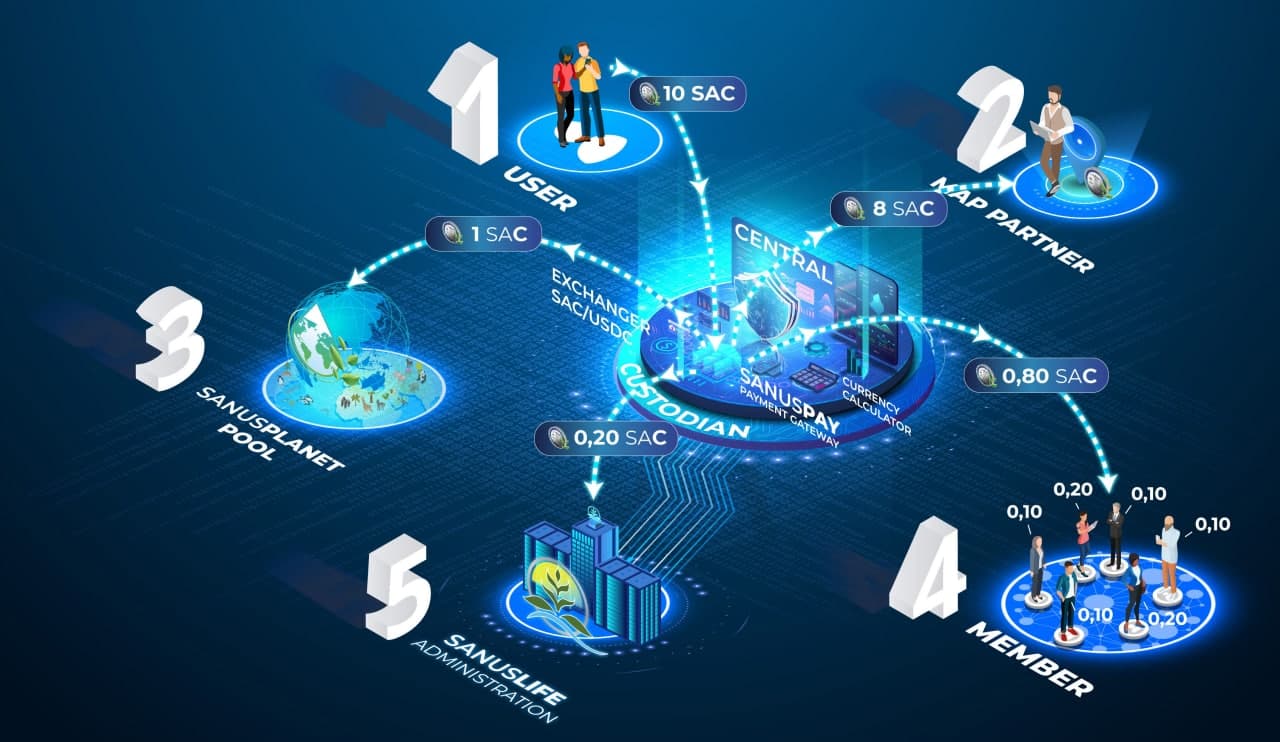 “The Green Voucher”: SANUSLIFE launches sale of utility payment tokens on its own website

The South Tyrolean company SANUSLIFE has been offering its own utility payment token in its closed ecosystem for three years. The SANUSCOIN is stored decentrally on the Bitcoin blockchain. After the coin, which in the future will give a share for environmental protection and human welfare with every transaction, could previously be purchased against the cashback SANUSCREDITS or on external exchangers, direct purchase via the SANUSLIFE website is now possible.

In 2018, the utility payment token SANUSCOIN was stored 777,777,777 times on the Bitcoin blockchain. Over seven years, one-seventh of the coins will be distributed annually in the process. Until 2024, users and members of the SANUSLIFE ecosystem can collect credits over the year and exchange them for a corresponding share of SANUSCOIN in January of the following year. This means that the company from South Tyrol’s capital was already a pioneer in the history of company-owned coins three years ago. Since this year, the token can be purchased not only via LATOKEN, but soon also via The Rock Trading. Now the company of founder and CEO Ewald Rieder takes another big step on the way, a real payment alternative: From now on, thanks to the now granted license on the part of the VQF in Switzerland, the SANUSCOIN can also be purchased in packages (300 EUR, 600 EUR and 900 EUR) via its own website. It is possible to purchase one of the three packages offered every 30 days.

This step paves the way for even easier access to “The Green Voucher”. Instead of taking the complicated route via external exchangers, all interested parties will in future be able to purchase the SANUSCOIN securely and easily via the website. The coins are transferred after the purchase by a bitcoin transaction via the decentralized way into the so-called SANUSWALLET. Through a scanning process with the wallet, the company SANUSLIFE is informed of the receiving address. The SANUSCOINS always remain stored on the Bitcoin blockchain. Here, the company builds on security and full transparency, whereby each transaction can be tracked via its own SANUSCOIN Explorer.

“With the Bitcoin blockchain, we currently have the measure of all things in terms of security and transparency due to its familiarity and decentralized structure. Therefore, there was no question in my mind that we absolutely had to bring our token onto this blockchain as well. And that is exactly what we have succeeded in doing with SANUSCOIN,” says Ewald Rieder, shedding light on the background to the decentralized transactions.

“With all the new tokens coming onto the market, it was important to us from the start to apply seriousness and regulation. This means not only respecting all regulations such as money laundering laws, but also introducing purchase limits and presenting transactions in a transparent manner. The topic of environmental protection and nature conservation is in our DNA at SANUSLIFE, so we also wanted to connect this topic with our own coin.”

The fact that the SANUSCOIN is also called “The Green Voucher” is due to its direct connection to SANUSLIFE’s Foundation. For every transaction made with the utility payment token, a portion is donated to the SANUSPLANET Foundation Pool. The experienced and

passionate environmentalist Magdalena Gschnitzer is responsible for selecting the projects and has already supported several projects together with SANUSPLANET.

The future of the utility payment token is now further triggered by the big step of the sales launch on its own website. In the future, the coin will not only be available in a decentralized manner via the blockchain. Ewald Rieder’s company is also already working at full speed on its own SANUSAPP and its own payment method, SANUSPAY. For this, the SANUSCOIN will also be used centrally in a closed system in the future. Founder and pioneer Ewald Rieder explains:

“I am sure that if everyone buys SANUSCOIN now, and later discovers the possibilities in the SANUSAPP universe, he will have a lot of fun with it. He will possibly open the app every time he pulls out his smartphone. Behind the planned decentralized and centralized storage are so many mechanisms, so many advantages, and so much excitement and fun that the economic and crypto worlds will merge at breakneck speed. And who knows where the coin price will go by then!”

Security in the central system, which will be functional on the SANUSMAP where all acceptance points are displayed in the SANUSAPP and the eVOUCHER WALLET as a digital wallet, is provided by a custodian bank that keeps the central coins safe and sends them out in seconds when transactions occur. With the 2-world principle of decentralized and centralized storage of the SANUSCOIN, SANUSLIFE is creating a serious payment alternative and close-meshed connection between the economy and the crypto world in its ecosystem.

SANUSLIFE INTERNATIONAL GmbH was founded in 2006 by Ewald Rieder out of his enthusiasm for specially filtered water. Since 2009, Verena Rieder and her husband Günther Frei, as well as Florian Kerschbaumer have been shareholders of SANUSLIFE INTERNATIONAL GmbH in Bolzano (South Tyrol). Over the years, under the sales management of Ewald Rieder, a network of sales partners has been built up, especially in Italy, Germany, Austria and Switzerland, spreading the quality products and the business idea via a recommendation marketing system. Then in 2016 came the big change, the introduction of a new software including a new compensation plan, with more digitalization, and an expansion of the product range through new business areas: SANUSWORLD, SANUSPRODUCTS, SANUSSTORE, SANUSCOMPANIES and SANUSBUSINESS: SANUSWORLD is

SANUSLIFE’s in-house community. Here, participants are rewarded for their active participation with SANUSCREDITS. These are virtual bonus points that can be converted into SANUSCOINS. Since 2018, the company has been one of the first internationally active companies with a specially developed utility payment token, the SANUSCOIN. Today, SANUSLIFE is on the market through SANUSLIFE ADMINISTRATION AG, based in Baar (Zug), Switzerland, with a second company that is intended to establish itself as a fintech company; in addition, this company is taking on the function of crypto-exchanger in a second moment, in order to offer the exchange of SANUSCOINS into stablecoins and, in the future, into other coins.